Well, as you see beside these words, a new issue of Cemetery Dance is in the works. Currently issue #59 is arriving in mailboxes around the world and the next on the list is the issue you see beside me here. Click on the image for a full TOC. My story, "Living by the Highway," looks to be in the #2 slot, which is quite an honor. A bittersweet issue, in many ways, as it is also the final issue as editor for Robert Morrish, who has done so much over the past few years for bringing in new names to the magazine, myself included. He'll still be involved in the magazine as a contributor, however. Best of luck, Robert, and thanks.

Speaking of covers, check out another (still in progress as I write this). The anthology Coach's Midnight Diner 2 (Back From the Dead Edition), edited by Coach Culbertson is rolling along towards completion, with my story "Box" as one of the lead-off Editor's Choice Award stories, for which I'm quite honored. I'm quite happy to have it featured in this unique anthology, which mixes horror, mystery and science ficiton with Christian themes. They're taking pre-orders now for a discount ($15 instead of the cover price of $20) - click on the link above (or the image below) for more information. Take a look at the table of contents and you'll see I'm surrounded by a great company of other authors. Special shout-out to Michelle Pendergrass, who served as assistant editor and was responsible for me writing the story for the anthology in the first place. 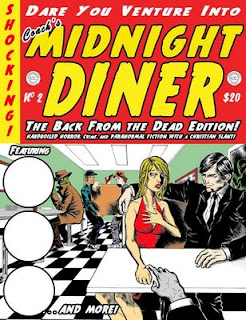 On the novel front, Solomon's Grave is slated for release in North America in just a couple of months! We have to finish up the cover art and proof the manuscript galley, then get the book prepared for a release. Looks to be shaping up for sometime around Easter. More as we know it! Lots to talk about, and I'll probably give it its own blog entry soon...
Finally, I'll be a panelist at the Boskone Science Fiction Convention next month. Haven't been back to that since my first visit back in 2006. Looking forward to this. The panel schedule hasn't been announced yet, but if you're planning on attending hunt me down and say hi...
Posted by Daniel G. Keohane at 8:17 AM 2 comments:

Hi, everyone. Before the requisite New Year's salutations, a couple of news blurbs.

My short story, "Two Fish To Feed The Masses" has been reprinted in the French horror magazine Borderline. The theme of the issue is zombies and this story fit right in. Funny, because the editor, Lionel Bernard, solicited the story from me (which originally appeared as an original piece in my old collection Christmas Trees and Monkeys) over a year and a half ago. Never heard back, so I assumed nothing happened with it. The other day, a slick magazine appeared in my mailbox from France, issue 11, with my story as the headline. Pretty nice! Anyway, if you can read French, check it out.

The anthology Coach's Midnight Diner 2, which had some financial problems getting off the ground last year, had gotten its legs and I hear will be released this month. It has my story, "Box," which was featured in a recent issue of Relief Journal last Fall as a way of promoting the Diner antho. The story will be the featured as the Editor's Choice for fiction in the issue, which I'm quite proud to hear. As I mentioned a while back, I'm pretty happy with this piece, probably one of my better ones. More as I hear about an official release date.

I hope everyone has a great 2009. We ended up braving the storm Wednesday night and did our annual First Night excursion into Worcester. Some great acts, and not too many lines this time around for obvious reasons. Then we returned home and watched Dick Clark's Rockin' Eve. I like Dick Clark, always enjoyed watching him, though it is a bit heart-wrenching to see him struggling so much post-stroke. Still, in a way, his brief statements are the only real part of the otherwise fluff ball-dropping hoo-ha. I don't make New Year's resolutions normally, myself, figuring if you're going to wait for New Years to resolve anything then you don't intend to do it, anyway. But this year, for various reasons, I'll make just this one - 2009 will not be 2008. In fact, 2008 will never happen again. Pretty simple, though probably harder than the obvious statement makes it sound.

Stay warm.
Dan
Posted by Daniel G. Keohane at 9:14 AM No comments: