Fear is the Mind Killer

My wife Linda and two of our children visited friends Marty and Carie Holman (and their 4 young kids) for a week in Valencia, Spain last week. Marty, during his month-long stay in Spain which was one-part vacation, one-part sabbatical, had been writing daily updates on Facebook of his experiences traveling in a new country with his family. He asked me to write some final thoughts on our own trip which he then posted as day 25 of his story:

The moment my wife Linda heard that that the Holmans were traveling to Valencia, Spain for a month, there was no question in her mind we were going to Spain for a week to visit them. I thought it was the wackiest idea she'd ever had and did my best to forget how these ideas of hers usually end up pretty darn good times. Everyone knows Spain is a backwoods country riddled with crime and swarming with ‘ne-er do wells’ just waiting to snatch away children and lash out with rusty sabers in the marketplace.

Yes, I watch too many old movies, and was probably mixing up Spain with early 20th century Istanbul.

Often, if I'm asked to step out of my comfort zone I will invariably fight back. I know my world well: which step creaks at night, where the dogs go when they run away, where the bathroom is, and even how to say "bathroom" which is kind of important after a good almuerzo! Fear will whisper to us that "new" equates to "bad."

God does not call us to have a spirit of fear and timidity, but of power, love and self-discipline (2 Timothy 1:7). Linda, on the other hand, has no such qualms about stepping into new experiences and seeing new things. This fearlessness has rubbed off on me a little. Even so, when an opportunity like this arises, my first reaction is to metaphorically curl up into a ball and shout, "No, no, no!"

Not counting trips to Canada and Mexico, 80% of Americans have never left their native country (based on State Department statistics, the percentage of people who own a passport and average number of trips US citizens have taken to non-neighboring countries over last ten years, and a wild guess). Aside from Canada and four trips "the countries" at Disney's Epcot, I've never left the United States. Suddenly we're talking about traveling with our two youngest children to a spanish city that I'd never heard of? I don't even speak Español!

Granted, my two oldest daughters visited Barcelona, Spain a couple of years before and did not return screaming in terror. In fact, They had a wonderful time.

After crunching the numbers and deciding we could (just) swing this financially, I had two options before me: 1) stay where I was and not personally experience the rest of civilization around me, claim as I do to be open to other cultures; or 2) step out of the boat and trust mine is not the only corner of the world worth standing in. 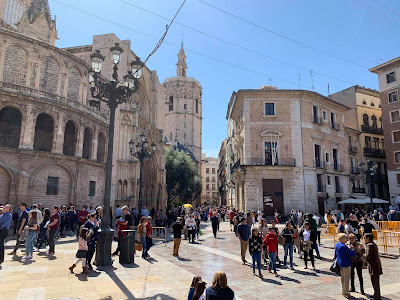 In the end we had an amazing time, posted pictures and videos from Valencia and perhaps learned some valuable lessons along the way, not the least of which is that the rest the world has an overflowing sense of beauty and culture and chocolate croissants and piña juice to share with us if we're willing to stop listening to fear and take a step of faith. Spain isn't perfect, but neither are the walls of our own home. Being cautious and wise is a good thing – an important part of survival, in fact. Now and then, however, you have to uncurl from the fear and trust God has a lot more of life to show you than what you can see today.

Posted by Daniel G. Keohane at 1:57 PM No comments: