One last Rock and Shock tidbit (sometimes I forget to post things here as well as facebook.. let alone can't remember when the last time was I sent and email update out).

The New England Horror Writers (http://www.newenglandhorror.org/) got a great write-up in a Worcester Magazine article covering rock and shock. Special kudos to TJ May for putting this event all together (and representing the NEHW as he did). I also got a quick mention in the article, which is always nice... :-)


http://www.worcestermag.com/night-and-day/featured/Its-a-Rock-and-Shock-weekend-104896294.html
Posted by Daniel G. Keohane at 7:38 AM No comments: 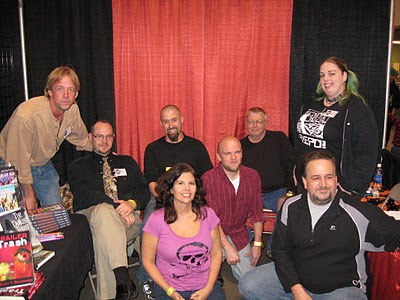 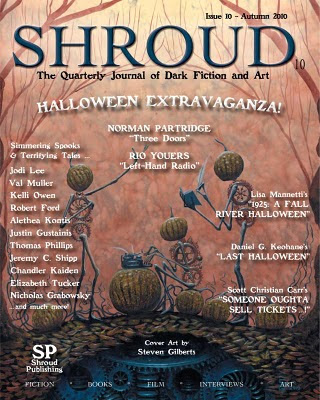 When guest editor Kevin Lucia put out a call for stories for their special Halloween issue of Shroud Magazine, I wrote what is probably my first short story in about a year, "Last Halloween." You can pre-order this issue here. You'll probably also be able to find it in Barnes & Noble and other major racks, but if you want to be sure of getting a copy, probably best to pre-order above. If you do see the magazine in stores, let me know.

The background on the story. I used to carry a small notebook with me as story ideas came to me, and more recently a Palm Pilot. I had two ideas jotted down, the first noted a few years back during trick or treating - what if a mother and her kids went trick or treating, but no one else did, for some reason everyone was afraid to go out at night but she insisted on bringing her kids - how would the neighbors deal with the situation, and what, exactly was the situation? Another note I'd taken was the concept of ghosts being drifters, like mist, wandering, wandering. There was more to that idea, but I simply used the drifting ghosts, coupled with the woman taking her kids out on Halloween when she should no longer be doing that, and the result, I hope, is a pretty cool story of loss, yearning and addictions - and withdrawals - people have for one another, and the past.

I think it came out really good, kind of quiet and sad but then themes like that are, I suppose. But I'm happy that the overall feel of the story, envisioned years earlier when I jotted the thought down, managed to come out. Let me know what you think of the piece. We never have enough feedback as writers.

Also, major kudos to artists Danny Evarts, who did all the interior illustrations and layout, and Steven Gilberts for the amazing (as always) cover art.
Posted by Daniel G. Keohane at 8:51 PM No comments:

Me and "Uncle Machete" at Rock and Shock last night 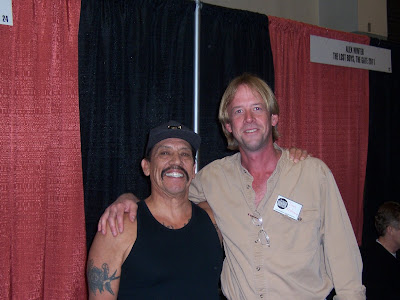 Danny Trejo after signing a picture for my kids at Rock & Shock
Posted by Daniel G. Keohane at 8:38 AM No comments: 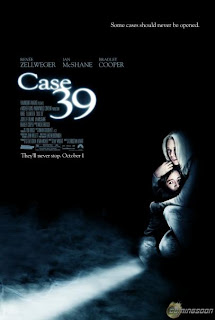 Hi, everyone. I'll be manning the New England Horror Writers table tonight from 6:00 - 10:00 at the Rock and Shock convention in Worcester MA, along with co-chair Tracy Carbone, TJ May and the gang from Necon! If you decide to brave the weather and come out, look me up.

Also, LL Soares has just posted my new review of the at the theaters (for now) horror film CASE 39 up at Cinema Knife Fight. I have to admit, this is the first time I actually slammed a film in my column. No offense to the filmmakers, but hey, I can't like everything out there. :-)
Posted by Daniel G. Keohane at 12:16 PM No comments:

My Review of PI Now Showing at Cinema Knife Fight

Hey, all. Quick note to let you know my review of the mind-tripping film of math terror PI (1998) is now up at Cinema Knife Fight. A unique movie, a mind-blower for sure, and had its ups and downs. And I learned something about myself, and the universe, at the same time. Check it out....
Posted by Daniel G. Keohane at 6:09 AM No comments: 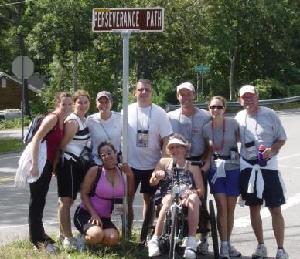 Well, it's been a few weeks since the MS Challenge walk and I wanted to drop you a quick note to let you know how it went.  Once again, the National MS Society put on a great event.  Anne and I really enjoyed our weekend together as well as sharing laughs and stories with the hundreds of others walking with us.  The weather that weekend could not have been better, with the hot weather of the past few months giving way to a comfortable two days in the low 70's.  Just a few blisters formed over the thirty miles but nothing major.  Next year, the event's mileage goes back up to fifty so I'll enjoy this reduced wear and tear on the joints while I can.

On the fund-raising front, team "Wheels and Heels Against MS" raised over $11,000!!  For those of you who participated in my "Recycling for a Cure" effort, the final can and bottle tally was just over $500. (those nickels sure do add up!)  I'll be looking to raise that recycling bar even higher next year.

Thank you all so very much for your support this year!  Your never-ending generosity never ceases to amaze and inspire.  Throughout these tough economic times, you continue to reach down deep and lend your support.  For that, I cannot thank you enough.

I also wanted to share some very recent and exciting news from the National MS Society.  Just last week, they announced that the FDA has approved the first oral disease-modifying drug to help fight MS!!  The drug's name is Gilenya and will be available via prescription in the next few weeks.

You can read more details regarding this medication as well as other advances on the National MS Society's web site: http://www.nationalmssociety.org/index.aspx

Thank you all, again, for helping to fund this research and for the very important role you all play in the battle against Multiple Sclerosis.

Paul Keohane
Posted by Daniel G. Keohane at 9:55 AM No comments: