Yep, well, here we are, time to look back at a very eventful 2019, beginning on this Eve of 2020 with my picks for favorite moves if the past year.

As a number of my fellow writers/reviewers slowly circle the wagon on a possible new Movie Review Site (more as this develops), some of them have also posted their picks for favorite 2019 movies. You can find them (and this list will expand as they publish them) at:

When I looked back on how many movies released this year I've managed to see  I was shocked (39, to be exact), not to mention movies from earlier years I got caught up on (25+). This year's was a slightly less-eclectic-than-usual but overall enjoyable one. There are still a large number of movies on my To Be Watched list I haven't had a chance to see, such as KNIVES OUT, LITTLE WOMEN, THE AERONAUTS, GEMINI MAN, ZOMBIELAND: DOUBLE TAP and THE LIGHTHOUSE, to name only a few. As I get a chance to see these I might just alter my list below a wee bit.

10 (tie): AD ASTRA: I really wanted to see this even after catching echoes of negativity around it. The concept was intriguing and I went into with only half a trailer's knowledge of the plot. Seriously, though, science fiction and Brad Pitt? Two of my favorite movie ingredients. I really liked this film, though I understand why an average viewer might not enjoy it. It's slow, very introspective and there are some plot points near the climax that shake believability a tad, but it is beautifully written, acted and filmed. The effects are gorgeous, with no sound in the vacuum of space which is always a plus. One of the more underrated films of 2019. Worth checking out, as long as you're not expecting one of the many STAR WARS entries. 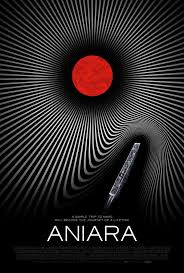 10 (tie): ANIARA: I give this Swedish language science fiction gem shared space with AD ASTRA because, though the sets and effects might be lower budget, it is still fascinating to watch and it tries as hard, if not more, to impact the viewer. I could list it here for it's earnestness, alone. A highly populated ship enroute to a colony on Mars has an incident and veers off course. Without the ability to steer the crew and passengers must face an extended - if not permanent - life in space unless a solution can be found. Alternative existential and heart warming - it's mostly existential - a wondrous view into the what-if's of the average human's response to the isolation of deep space.

9: ROCKETMAN: It had to follow the near-perfect rock bio-pic BOHEMIAN RHAPSODY (2018) and so was destined its runty little sibling, and yes there are similarities in the storyline because the life of a huge rock star is a predictable one (rising star, drugs, over-inflated ego, crash and burn, repentance - the story of life I suppose). ROCKETMAN rises above the sameness by telling John's story more as a Broadway musical. The cast breaks into song mid-scene with extras in the background becoming dancers, a tinge of fantasy melded into the story of misfit and musical prodigy Reginald Dwight and his lifelong friendship with another misfit and music prodigy Bernie Taupin. Fun to watch and great music. And Taron Egerton became John, no question. 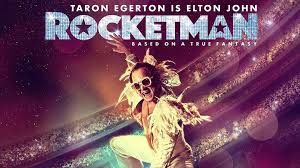 8: JOKER: Oddly enough, for such a brilliant film, this almost ended up in my honorable mentions as I was shuffling the list, mostly because it's so - damn - dark. Joaquin Phoenix was brilliant as usual in the title role of a mentally disturbed young man who, when he is taken off his government issued meds, struggles to hold his thinning world together for himself, his mother and his lifelong dream of being a comedian. Wonderful camerawork and directing, we are drawn deeper into this world. I left wondering if this was an origin story for the famous Batman baddie at all, or the result of deeper and deeper delusion on the part of a sad, lost man named Arthur Fleck.

7: SHAZAM!: This movie was AWESOME! With an exclamation point. Aside from perhaps ENDGAME (see #3 below), by far one of the best superhero movies of the year - if not the decade. Zachary Levi balances well the line between adult and empowered teenager. Asher Angel as the actual teenager Billy Batson held his own, with a strong cast of relative unknowns. Great for the entire family, with some gleefully dark moments both in the superhero and character stories. Strongly recommend this one. 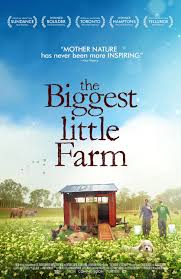 6: THE BIGGEST LITTLE FARM: finally saw this just the other day, a documentary from a couple living in the city with a dream of owning a farm and a dog who forces them to pursue it. The cinematography was eye-popping at times, and the story never dragged - from the arrival at a deader-than-dead plot of land in the California hills through their struggles to bring it all back to life, all the while sticking to their number one rule: do it all while keeping a balance with nature. Inspirational all the way through. It's a documentary about a farm and I teared up a couple of times.

5: A BEAUTIFUL DAY IN THE NEIGHBORHOOD: Tom Hanks plays Mister Rogers. Seriously, do I need to say anything else? Fred Rogers is only a supporting character (though a major one) to the reporter on whose eventual article the movie was based. The reporter who has to interview Rogers for a fluff piece to try and save his career and, of course, learns a lot in the process about kindness and humanity. I expected to not be able to un-see Hanks as Hanks in the film, but of course he became the role. I was taken aback leaving the theater when I looked up an article about Fred Rogers, saw his picture and thought, 'Oh, right, THAT'S what he looks like.' Hanks had become him so well. Now, I didn't ball my eyes out as I had expected, but did tear up a couple of times. Yes, I cry at movies a lot.

4: MARVEL'S AVENGERS: ENDGAME: They had to end it big, and big they did. With every possible character in the 10-year Marvel cinematic universe coming together eventually to battle cinema's favorite bad guy, how could it not? How they did this was at least mostly believable, and enjoyable to watch. They skimmed over the whole issue of time paradoxes with humor and the concept of parallel universes (a theme which is going to be built on in future movies, as they had in the nineties with the comics - and unfortunately also nearly killed the comics by doing so). Only a fraction less enjoyable than INFINITY WAR, it was still brilliant and a worthy conclusion to the saga. 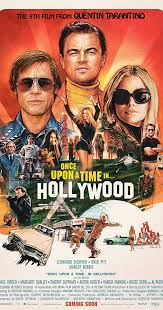 3: ONCE UPON A TIME IN HOLLYWOOD: Friggin' brilliant. Saw this in a late, late showing with some friends and maybe that added to it, but I liked this almost as much (almost) as Tarantino's magnum opus PULP FICTION (1994). Expertly filmed, armed with just enough humor and surprisingly little violence (until the end). There always seemed to be the lingering threat of violence woven throughout, but HOLLYWOOD was so much the writer/director being content and confident in his craft and wanting to tell a fable for his time. Great (if not somewhat obscure) music, too.

2: STAR WARS: THE RISE OF SKYWALKER: How anyone can bash this final chapter of a forty-two year story arc is beyond me. But we geeks are a picky lot, no? I loved it. Abrams brings most of the story threads from episode 7 and 8 and all the way back to 1 in some cases, and ties them together with love of finesse. The storyline with the Sith: finally a view into the darkness of the dark side worthy of its name. Rey and Kylo? It worked for me, how it all turned out. Abrams and the writers removed any possible romance between Finn and Rose, yes! (that relationship was one of the few things I disliked about THE LAST JEDI (2017)). Some great moments in an enjoyable and exhausting Star Wars entry. 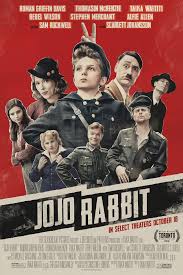 1: JOJO RABBIT: movies about Nazis scare me, always have. Movies about people who support the Nazis disturb me. JOJO RABBIT is about a young boy who is excited to join the Hitler Youth movement and has an imaginary friend: Hitler (played to comic, and frightening, perfection by writer/director Taika Watiti. Hitler is carefully crafted to always be from the boy's perspective, his inner struggles and desire for conformity. Funny, sometimes outright hilarious at times, all of us watching slowly, unavoidably, grew more and more frightened as we loved every character and the war stumbled to an end yet we couldn't breathe easier because one of the characters we love is a Jew hiding in the boy's house and this is Nazi Germany. The film balances the terror and violence with needed humor so well. On top of all this, it co-stars Sam Rockwell, who is one of the best actors on the screen today.

Honorable Mentions: YESTERDAY (funny, touching and original, with great music), DOCTOR SLEEP (a very worthy sequel to the film and book, balancing both), GODZILLA: KING OF THE MONSTERS (fun and great effects), CAPTAIN MARVEL (I actually liked this movie better the second time around, well done origin with a slightly weak ending), TOY STORY 4 (amazing how the fourth installment, like every other, is as good and impactful as the original), JUMANJI: THE NEXT LEVEL (not quite as good as the previous, but still very, very fun), THE FAREWELL (A strong, strong cast led ably by Awkwafina, touching and funny, spoken in half English half Mandarin, my oldest son's favorite of the year), ALADDIN (loved everything about this take including Smith's Genie - so does my five-year old son) and SPIDER-MAN: FAR FROM HOME (predictable but still fun to watch, the Spider-man movies never shake me up like many of the other Marvel movies do, even considering this was my go-to comic as a kid, but it's still quite good).

Stay tuned for more upcoming 2019 retrospectives, including the books I got to enjoy, and I might even do a what-happened for this year because, honestly, it was quite a year.
Posted by Daniel G. Keohane at 12:26 PM No comments: