This has been a good year for finding new authors and really digging deep into some of new science fiction for me. I also read a couple of biographies of past music and TV heroes, read through and enjoyed a few books I’ve had in my library for far too long, and searched out classics of literature that I missed over the first half of My Life.

Some of my favorite new reads this year:

The first two installments of the Murderbot Diaries, specifically All Systems Red (novella 1) and Artificial Condition (2). Written from the perspective of a recently self-liberated mercenary android, Martha Wells’ series of novellas are brilliant in building this insecure creature with a mysterious past as extremely likable. Looking forward to reading more entries in this series.

The Last Days of Cafe Leila by Donia Bijan was an impulse purchase based on the interesting description of an Iranian-American woman returning home after a divorce, and the her family history in a country which basically went to hell when religion and politics mixed in such a catastrophic way. Beautiful prose and deep, well-drawn characters. Couldn’t put this down. Loved it.

Ancillary Justice (Imperial Radch Book 1) by Ann Leckie, is a book that should have frustrated me to no end but I couldn’t put it down. The AI controlling a colonizing race’s military starship also inhabits dozens of conquered humans used as host bodies. The story moves quickly in two timelines to build some fascinating worlds and characters, even if the reader is never sure who is male or female. The AI doesn’t have the ability to distinguish so everyone is “she”. It gets confusing sometimes, but go along with it and you eventually find a groove. I've never been of the school that insists (sometimes violently) that gender is purely a social construct, but I admit it didn’t matter to me, or the story, what sex the characters were. It's utterly original and fun.

Iscariot: A Novel of Judas by Tosca Lee: the author of one of favorites from a previous year (Demon: A Memoir), Iscariot tells the fictional story of the apostle Judas’ life from childhood to his suicide after betraying Jesus. Seeing Jesus’ ministry from this man's perspective is fascinating, and though Judas becomes more of a sympathetic figure, what happened is not glossed over – instead Lee takes a guess, given the world of the time and the assumption that Judas was sincere in his faith (though perhaps not eventually in Jesus), how he could have come to the point of turning in his friend and rabbi? As usual, fantastic writing. 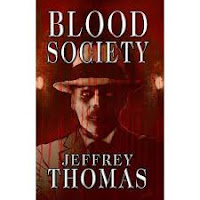 Blood Society by Jeffrey Thomas had been sitting on my TBR list for a couple of years - you know how it goes with Kindles, new acquisitions push older ones down the pipe. Thankfully I decided to reverse browse and realized I had a Jeffrey Thomas book unread on my virtual shelf, which should be a crime. This one was a hoot – not really horror even though the crime boss is a vampire. It reads more like a crime thriller, and it's definitely a thriller. Fun book, great characters (including Al Capone) and a pace that doesn't let you put it down. This was a great treat and reminder how amazing a writer Jeff is.

Other books from friends in the biz which I really enjoyed:
Gwendy's Button Box by Stephen King and Richard Chizmar, a novella which is a perfect blend of King and Chizmar. Their voices blend seamlessly into a fun adventure which will appeal to pretty much any age. Loved it and looking forward to reading Rich’s standalone sequel.

100 Fathoms Below by Nicholas Kaufmann and Steven L. Kent. I’ve never read anything from Nick I haven’t thoroughly enjoyed (and I’ve read quite a lot of his stuff), and this was no exception. A brilliant take on the vampire novel squeezed into the gasping confines of a submerged submarine.
The Girl On The Glider by Brian Keene – another entry languishing on my TBR pile and to my shame, since this novella was brilliant. Brian’s another who rarely misses with his writing and this one was written in such a personal, autobiographical way I had no clue (until the afterword, and even then…) how much was true and how much fiction.
The Last Sacrifice: Tides of War #1 by James A. Moore – having finished every volume of Jim’s amazing Seven Forges series, was excited to start this. Far darker in setting and tone, the book starts off with a bang and really doesn’t let up much at all. You’ll need to spend some time in the sun after reading this. Jim’s one of my favorite craftsmen in the biz.

Other novels I read and enjoyed:

The Calculating Stars by Mary Robinette Kowal was great all the way through, but especially the first half, after which the ending was expected and unfortunately a little more familiar. Still loved it.
A Long Walk to Water by Linda Sue Park, a short, touching book which opened my eyes to the lengths people still go today to survive, and the madness of life in some parts of Africa, compared to our cozy little worlds here
Eve: A Novel by Wm. Paul Young, the author of The Shack, was another of his interesting twists on theology, looking at the creation story through the lens of characters who might be human, or angels… it’s weird but interesting. Not as eye opening as The Shack, but still worth your time

Under “Classics,” I finally experienced:
Rendezvous with Rama by Sir Arthur C. Clarke. Clarke is usually hit or miss with me, my favorites being Songs of Distant Earth and 2001: A Space Odyssey. Rama would go on that list. Not a fast moving book, but clever and fascinating and surprisingly not very dated. The idea is clever with pretty cool characters, less cookie cutter than usual. Fun book and I’m curious enough about the sequel I check it out soon.
Girl, Interrupted by Susanna Kaysen, the life of a woman living in the sixties who commits herself to the mental health institution McLean Hospital. Funny and touching in equal measure, and overall wonderful read.
1961’s Revolutionary Road by Richard Yates has main characters who are some of the most whiny, codependent and unlikable in any book I’ve read since the recent Gone Girl. And I couldn’t stop reading it. Like driving by an accident on the road. A tribute, this, to the author for sure.

Play It As It Lays by Joan Didion – my word, what a book. Wonderful descriptions and world building. The lost soul driving this story is sad and funny and without any decent compass in life. Can’t recommend this one enough.
Of Mice and Men by John Steinbeck – yea, it took me this long to finally read this classic short novel (more a novella). Steinbeck has earned his acclaim for being one of the world’s best writers. A book that is both honest and ahead of its time, yet still a perfect snapshot of the depression-era America it represents. At least one small, sad, beautiful slice of it.

On the non-fiction side of things, I read a couple of fun biographies:

Why Should the Devil Have All the Good Music?: Larry Norman and the Perils of Christian Rock by Gregory Thornbury, is the book I’ve been waiting for, for years. An objective, honest look at the life of the man who shook up the Christian music world in the sixties and seventies and almost single-handedly spawned the modern Christian music scene. Norman’s music was one of the first ways God got my attention as a teenager and his music is still as beautiful and rough as ever. He was also pretty messed up in a lot of ways, which this book does not shy away from.
Who on Earth is Tom Baker? by Tom Baker. My second favorite Doctor Who, Baker’s autobiography is long and thick with some fascinating stories (a surprising number of which seem to involve his penis for some reason). An interesting snapshot into growing up in post-war England, which honestly seems like another world sometimes. Ironically, very little of the book deals with his Who years, and after the halfway point I did find myself skipping ahead. It’s just so long. Still, a nice treat for someone who grew up watching this guy on my little black and white TV

Letters to the Church by Francis Chan turned my view of what a church could be on its nose, and for my wife and I, and a number of close friends who recently went through the nasty breakup of our previous church, this came at a great time. Read this and I dare you not to be convicted about a lot of things. I’m now connected to another “traditional” church family, but I see it, and its possibilities, through a much wider lens.
.
Finally, I read front to back a couple of issues of Locus Magazine (Jan & Feb 2019), always amazed how well put-together this magazine is for such a limited budget. And, a cookbook! Vegan for Everybody: Foolproof Plant-Based Recipes for Breakfast, Lunch, Dinner, and In-Between by America's Test Kitchen. A lot of valuable discussions of types of food one can obtain, but a limited number of recipes, and honestly it’s tough reading a cookbook on a Kindle.

That's it. I'd started a few other books, and in some cases got a decent way in before putting them down for various reasons. But overall, a pretty good year of reading.
Posted by Daniel G. Keohane at 7:09 PM No comments: