Bushnell Article in the Hartford Courant

Wanted to post this cool article Hartford's major newspaper The Hartford Courant posted on their website (and I assume in the paper itself) about tomorrow's Bushnell event:

Heading to Hartford for Halloween!

I'll be attending as a speaker the new Boo! At The Bushnell conference in Hartford, CT, this Saturday, October 31st. The confeence celebrates the 200th birthday of Edgar Allan Poe. It will be held at the Bushnell Performing Arts Center. The agenda for this free-to-the-public event is:

10:45 to 11:30 Alisa Sheckley Kwitney
Graphic novels and the evolution of horror in literature

11:45 to 12:30 Dan Keohane, Co-Chair, New England Horror Writers, an organization providing peer support and networking for writers of horror and dark fantasy in the New England area (I'll also be talking about writing horror both in short story and novel form)

1:45 to 2:30 Tim Deal, Editor, Shroud Magazine
What an editor wants in a horror submission

2:45 to 3:15 Peter Fox, Screenwriting Instructor
The evolution of horror in film

3:15 to 5:00 Movie: The House of Usher
Post-show discussion with Peter Fox

This conference is made possible by a generous grant from the National Endowment for the Arts and their Big Read Program.
Posted by Daniel G. Keohane at 10:28 AM 2 comments:

"Box" Gets an Honorable Mention in Best Horror of the Year 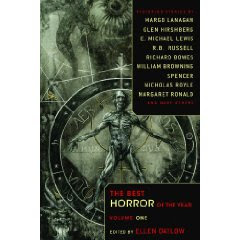 My short story "Box," which was published this year in Coach's Midnight Diner 2, Back From the Dead Edition, but had been previously published in its sister publication Relief Journal, Volume 2.2, in 2008 as a promotion for the upcoming anthology. Ellen Datlow, who co-edited Year's Best Fantasy and Horror for years until the long-running Best of anthology was canceled recently, has continued the series as a horror-only collection with Night Shade Books.
Now called Best Horror of the Year, Volume 1 continues the time-honored tradition of republishing Ellen's choice of the best stories published in the previous calendar year, as well as listing a plethora of Honorable Mentions. Always cool to get this latter nod, and nice to see "Box" get the recognition. Thanks, Ellen, and congrats to all the other HM's listed.
Posted by Daniel G. Keohane at 3:25 PM 1 comment:

Writers and Artists in the Heart of New York, Part Two 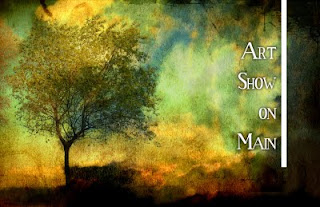 On Saturday was the Big Event: Union Church's annual Art Show on Main. Now, I'd thought Main Street was, well, a street, but no. Union is a MONDO church, built onto an old elementary school, and it's main reception hall is at least three times as big as my house, hence the name they use for it - Main Street (even done up with lamp posts and coffee shop, very cool). Another special shout-out to the organizer of the event Tamara Murphy, who was as gracious a host as I've ever met, busy, but always taking time to enjoy herself. This year, for the first time, it was not just art, but writers and musicians as well.

I got there early, and did my best to help Andy with the artwork displays. Later, Kevin & I held court in the main hall from 1:00 - 3:00 for critique sessions for anyone who wanted to bring a writing sample to discuss, or simply talk about writing. The two hours flew by (wasn't until then I realized I hadn't eaten anything since breakfast!). We then moved to a smaller hall where we participated in a panel discussion of art, in all its forms. Kevin & I were the writers, and answered varying questions along with artists Julia Dean and Erin McMahon and musicians Brian Moss and Jason Harrod. Then we ate, and the official Show began at 6:00.

What an amazing show. Tamara introduced the show, then the show kicked off. There were three 'acts' as it were, with headliners Brian and Jason performing in each. We had other amazing musicians playing, writers reading their stories or poems, the artists discussed their work and methods. Just one brilliant performer after another, so much so Tamara had to chime in and make everyone stop paying so much attention and mill about! It worked. The entire night was like a very cool coffeehouse. Me, I read an excerpt from Solomon's Grave in the second hour. Seemed to go over well. Kevin read an excerpt from his Coach's Midnight Diner story in the third act.

Really, I can't say enough good things about the show, and was pretty bummed out when it ended.

The next day, I had to get moving if I was going to make it home soon enough to close the pool (ah, October, one of the saddest moments of the month when we can't pretend anymore and the pool gets covered for another 7 months...). The drive was even more stunning since it was nice weather. Five and a half hours later, I was home, with a lot great memories. Thanks again to everyone for such a great time. I hope I can make it back, even if only as a visitor, next year.
Posted by Daniel G. Keohane at 1:34 PM 4 comments:

Writers and Artists in the Heart of New York, Part One

Sorry it took so long to post this, been pretty much out straight since coming back from Binghamton and parts thereabouts. So much to talk about, but let's take this a step at a time..

I had a wonderful time this past weekend in upstate New York. Everyone I met welcomed me with open arms, and lots of questions (especially the Seton students!). To recap as briefly as I can:

Thursday, I took the 3 hour drive to Troy to visit my son Andrew. Haven't seen him in a month and it was great to wrap him in a bear hug - twice - when I saw him. Delivered a bunch of critical supplies like a mini fridge and jelly beans. Kicked his butt in pool... OK, well, we each won a game. :-)

When he kicked me out so he could head to class, I drove another 2.5 hours to the small village of Lisle, NY, just outside of Binghamton. I have to say first, I almost wished the drive didn't end - even with the clouds and the occasional rain, I've never seen such a beautiful country. Rolling hills, farms and more farms and quaint small towns (yea, OK, I just used 'quaint' in a sentence, but couldn't think of a better word). Reminded me of Acadia National Park, only hundreds of miles long. Special thanks to Andy Palmer who was kind enough to put me up for three nights! Andy's an artist with one of the coolest houses in existence. He and I had a frighteningly lot in common on so many levels, and we instantly became friends. I'll miss him - and his moldy coffee and questionable butter. :-) 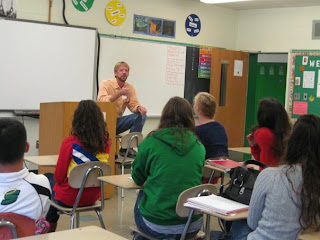 On Friday, I met with Kevin Lucia's (my overall host for the weekend and the reason I was there in the first place) Creative Writing class at Seton Catholic High School. I've been blogging with the students for the past couple weeks as they read and comment on their assigned work: Solomon's Grave. I also met with five other honors and AP English classes throughout the day. Special shout-out to everyone! I've included some photos. I had a really, really fun time talking with everyone, both during class and in the two and a half minutes between bells. 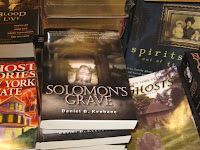 That night, Kevin had arranged with the local Barnes and Noble for a book signing of Solomon's Grave. Can't tell you how great it was to see the book on the table with the other, more-deserving works in the store. As per usual for a bookstore signing unless you're already a best-selling author, turnout was pretty low, but I still had a great time. The folks running the shop were terrific, and very attentive. Overall, though no books moved, I had fun. :-)


To be continued in Part Two, where our hero steps into one of the coolest churches in existence and one of the most enjoyable artist events he's seen in a long time, and he also eats lots of pasta... stay tuned...
Posted by Daniel G. Keohane at 8:29 AM No comments: