Charging Towards THE END, again!


So, yes, I typed THE END on the first draft of my latest horror novel, appropriately enough, a couple of weeks back on Halloween. Then November came along and I had two choices: begin editing Lost in the Woods (or The Woods, or The Thinning, whatever I end up with as a title) in earnest, or… I went with or…

Over the past couple of years, I’d been working on two novels concurrently: the above title, and Plague of Locusts. Where Woods is a fairly straight horror novel, and as such will be authored by my dark half, G Daniel Gunn, Plague of Locusts falls in line with my other biblical-themed suspense novels, written under my actual name. There’s a difference in this particular story though: it science fiction. I've been a sci-fi fan since I was a kid, and a few years back decided to give it a go, myself. After finishing an early version of Plague of Darkness, the idea for Plague of Locusts was spawned by a one-paragraph blurb I’d written (and subsequently forgotten about) in a notebook during a very boring meeting at work. The scene I’d written became the opening scene of Locusts….

So, anyway, I finished Woods the other day and knew that I had only 30,000 words or so left to write in the first draft of Locusts. After some prayerful debating, I decided that in honor of NaNoWriMo this month, I’d put the horror novel aside to ferment for a few weeks before jumping back in to edit, and finish the first draft of Locusts. So far I have written around 7K words, picking up where I left off last winter. I really like this novel – a lot of characters who feel fleshed out. It’s fun to write about them. This could end up being a series, as sci-fi novels sometimes end up doing, but who knows. It’s definitely open to it. Wish me luck. I may not write 50,000 new words for NaNoWriMo, but I’m aiming to at least finish the first draft of a second novel in only a month!
Posted by Daniel G. Keohane at 2:45 PM No comments: 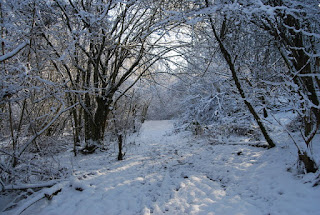 Just yesterday I typed the oft-sought after words THE END at the completion of a new novel, tentatively titled Lost In The Woods (might change it to The Thinning). Now, it's just the first draft, so have a long journey of revision ahead of me, but that's OK. I like revision. Like smoothing and polishing a statue (I guess - never actually carved a statue, but allow me my metaphors). LitW is a novel I'd started a few years back.... quite a few, actually. I'd put it down, pick it up, worked on Plague of Locusts for a time, went back to Plague of Darkness and massively rewrote that novel. But kept finding myself returning to this book. It's goofy fun horror, but since no real biblical connection (loose tie to mythical concept of Purgatory, but not really), it'll be under my pseudonym G. Daniel Gunn. More as revisions commence.

In the meantime, it's November, National Novel Writing Month. I might jump back in to finish the first draft of Plague of Locusts this month, then go back to Lost in the Woods. If I do that, I'll have two complete novels, one for each name. :)
Posted by Daniel G. Keohane at 1:25 PM No comments: