Plague of Darkness Giveaway at Goodreads

I'm doing a giveaway for copies of Plague of Darkness on Goodreads...

Giveaway ends December 12, 2014.
See the giveaway details at Goodreads.
Enter to win
Posted by Daniel G. Keohane at 9:08 AM No comments:

Realized I never gave the link for pre-ordering Plague of Darkness, which is coming out officially this Thursday.

Pre-order today!It'll do wonders for my Amazon rankings. :)
Posted by Daniel G. Keohane at 9:05 AM No comments: 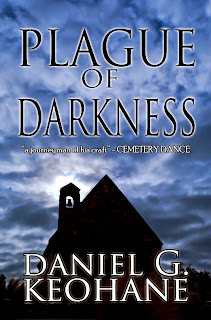 We have a release date for my new novel, Plague of Darkness: next Thursday, November 20th. You can pre-order the kindle version any time and on the 20th it will be delivered to your device automatically. The print edition is actually available now but hoping for the push to be on the same day, to help with rankings. 12.99 (unless on sale) for the print and only 2.99 for the kindle edition.

People hide their secrets in the dark. Sometimes, that same darkness is what will eventually reveal them.

Eight months after Saint Gerard's Episcopal Church closes its doors, the building has become the new home of Bill and Seyha Watts. The house, however, has plans for its new occupants. Trapped in a biblical darkness that can be felt, four people stumble through a surreal nightmare where the only escape is through their deepest fears and memories. Cut off from the outside world, they are prisoners of a power they cannot see, struggling to understand what is truth – and what is a lie.

I like to think this one is pretty unique, and pretty creepy. Hope everyone else thinks so. :)