Well, back from vacation. Nice to just get away, sleep late, use the strangely-chlorinated pool and relax. Anyway, while away I checked on the status of the Amazon contest. Margaret's Ark, even with the positive PW review and a glowing one from Amazon's top reviewer, didn't make the cut for the final 100. Ah, well. This was the tape I was sticking my chest out to reach. Thought it would be too narrow a scope for much past that, but I was really hoping for that one last nod or attaboy. Still, I was pleased with how the contest was run, and best of luck to the final 100 entries. Some of the exerpts I read were quite amazing.

Now, with a PW review, and some nice things said about the exerpt from nice people, we move on to the marketing end of things. Let's see what walls it might stick to, once flung.

The contract negotiations for the English language rights to Solomon's Grave with a small Canadian press are hopefully winding down so I can give the news offiically. And as I mentioned before, Plague of Darkness is hitting the German/Austrian shelves via Otherworld Verlag late 2008 / early 2009. Can't complain here, I guess. Things are moving on the international front. :-)

No other news to report. Of course, after a big letdown like the Amazon contest thing, I always second-guess my choice of direction - stay with Plague of Locusts or move back to the mainstream path. Wish I knew what to do, but at least now I recognize this for what it is and know to ignore the instinct to bounce like a pinball all over the place. I'll write whatever I want, and see where things fall. Obviously, one genre or another isn't really going to be any easier, so best enjoy whatever it is I'm writing and have fun with it. The rest will work itself out, or not. I may remain an obscure entry in some 21st Century in Horror tome in 2099, maybe not. Time will tell. As long as I enjoy doing it, am happy in the process (at least as I write), and do right in the eyes of God and my family, whatever that might be, I guess I'm doing OK overall, eh?

And a story I wrote... gasp... twenty years ago, about an evil clown in the basement and a boy named Billy, kept alive in spirit for years by my friend Fran Bellerive, may actually grow from a lost weed into a tree of sorts, along with fellow writer L.L.Soares. We're looking at it, and seeing if a phoenix might rise out of the neglected ashes of the old story, lost for decades (literally) in a file drawer. Time will tell....
Posted by Daniel G. Keohane at 11:20 PM No comments:

Plagues of Locusts and Darkness, Oh My. 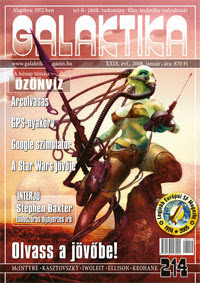 "Lavish", my short story which inspired Margaret's Ark, has now appeared in the Hungarian science fiction magazine Galaktika (the January 2008 issue). Click on the link to see the cover. I'm sharing the magazine with the likes of Harlan Ellison, which is very cool indeed. Hopefully I'll get my author's copy in the mail soon (mail time between countries can be tricky).
Well, Plague of Locusts is the lucky winner. After re-reading up through where I'd put it aside (to write Destroyer), 25K+ words and I really like this book, especially the characters who had become very real and fleshed out for me. I've been running through what I had written thus far, revising and mostly just getting my writer-head back into the story so I can become obsessive and keep the momentum once I hit the end of the paved road and start writing new words. This book is outlined only to a point, not all the way, so I am still not sure how it's going to end. But I've decided I like how it's gone so far and will wait and see where it brings me. A different tactic from the last book, but as long as it doesn't slow me down I'll let the characters and events dictate the outcome. Again, this one's more science fiction than horror, but there are horror elements in it. A cross-genre novel if you will. Why not? Not like I'm pigeon-holed at this point into any one style.

Back on the international front: Das Grab des Salomone (Solomon's Grave) has recieved a couple of glowing reviews in Germany/Austria from some very big reviewers, as well as a couple of good ones on Amazon.de. My editor is going to translate these into English for me when he has a moment, and I'll pass them along.

And some Dan's Blog exclusive news: Solomon's Grave's German publisher, Otherworld Verlag, has just bought the German language rights to another of my books: Plague of Darkness. Looks like Plague of Darkness will be premiering in Germany later this year or early 2009.

I finished my short story, "Box". I really like how it came out. Waiting on a couple of edits and we'll see where it stands with the anthology.

The fate of Margaret's Ark with the Amazon Breakthrough Novel contest will be known next week, on February 19th, when Penguin Books announces the 100 Finalists (out of the current 826 Semi-Finalists). I still only have 8 customer reviews as of this morning (thanks to those who left them, and to folks like Michelle Pendergrass who rallied on their own blogs for my cause), but that's OK. The more the merrier, but we'll see what the Finalist decisions are after Tuesday.
Posted by Daniel G. Keohane at 10:55 AM No comments:

I've been outlining what I think might be the next novel, Lost in the Woods, and it's looking pretty good. However, I've also been taking another look at Plague of Locusts, which I'd put on hiatus early last year. One of those crossroads I'm at, where to go now that Destroyer of Worlds is done. I had a dream last night that I started in on one of them, or maybe it was an entirely new one - I can't remember the details, nor which book it was. I suppose that's no real help, then.

I did finish up a new short story called "Box" which I'm planning to submit to the anthology Coach's Midnight Diner. Need to read through one more time and send it out, and see if it's a fit or not, or if they even like it. Still, I enjoyed writing the story, and special thanks to Holly Wang, who works with my wife, for some key translations into Mandarin Chinese.

Thanks to everyone who submitted a review for Margaret's Ark as part of the Amazon breakthrough Novel contest. A few people told me they left a review but it never posted. Seems this has been a problem, but it has been fixed. However Amazon did not re-post the lost ones, so unfortunately they're gone. Still, I've got 8 reviews, and they've been quite kind and instructive. Penguin Books will be announcing the Top 100 Semi-Finalists in two weeks, on February 19th. These will be out of the 836 Semi-Finalists, so competition is still fierce. Fingers crossed, and prayers welcome. :-) That's my goal - to make it to the top 100, at which time Penguin editors will read the complete manuscripts. Very welcome attention. We'll see how things wash out.
Posted by Daniel G. Keohane at 11:06 AM No comments: