50 Years With Rolled up Socks, or Three Strikes and I'm Out 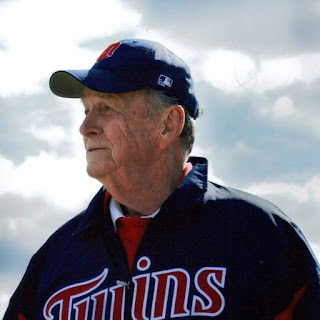 Joe Keohane - my father, not my brother nor his son nor his son, it's a popular name in my clan - made an historic decision earlier this year. Fifty (might be fifty-one) years ago, when my oldest brother Joe was a kid, Dad did what most Dads are arm-twisted into doing: coach his little league baseball team. He also coached my younger brothers on the same team. Dad's team was the major league Twins (to educate: there's Pee-Wees, what we call the Instructional or Farm league these days, then the minor league, then majors, then beyond to the more advanced levels of baseball existence). When Joe graduated from the majors, Dad stayed with the team, coaching the following year. And the following. Fifty years later, nearing 89 years old, with baseball registration dwindling in town and the league's need to reduce the number of teams, Dad voluntarily stepped down from coaching.

He was a great coach, taking his team to the championship at least twenty times, if not more.

He wasn't an overly-aggressive coach, sitting quietly on the side by the dugout and - after having quit smoking decades before - sucking on rocks to keep himself focused (never swallowed any, as far as I know). He was a good teacher, rolling up hundreds of socks over the years into balls for batting practice (allowed the boys to swing hard without worrying about chasing balls all over the place), never bothering with memorizing signals - when Dad wanted one of his players to steal a base, he'd simply shout, "Steal!" Usually worked (never hurt that the normally quiet coach was suddenly yelling, throwing everyone off-focus, except his runner).

He loved coaching. You could tell. And he did this for so long, he eventually coached the sons of former players (and if I'm not mistaken an occasional grandson).

In many ways, sports was how Dad related to and spent time with his kids. He wasn't just a coach for baseball, but also hockey with my uncle and godfather Ed Sullivan, and my brother, and my cousin after that.

But the annual summer run around the diamond was his specialty. And I only went to one game. I was eight (I'm always eight in my memories), no, probably younger, like four, sitting on the hill behind right field as the game progressed. Dad had to watch me, and I don't think I was allowed in the dugout for some reason (probably because I was four). I was bored, then scared, as the sun suddenly dropped below the horizon and I knew the darkness was going to swallow me whole. I'd be lost forever. I started crying and calling Dad and running over to him. There was a game on, and it took him quite some time to calm me down and explain that the sun had not set, but simply went behind a cloud. The sun came out soon after. I was not lost, but that strangely traumatic moment has been etched in my mind for four and a half decades.

In truth, Dad probably wasn't angry, he just has this deep, booming voice that my insecurity always interpreted as angry. Children with low self-esteem tend to miss the smiles on others.

I never went to another game, and likely was kept away so I wouldn't run onto the field (I might have done something like that, the memory is a little fuzzy). Around the end of college, nearly twenty years later, I told myself I would go to a game as an adult, really see what Dad did in these games, cheer the team on. Support him. Then it was after graduation, then marriage, and kids of my own, Cat's In the Cradle and all that. There was always something distracting me, making me lose track of time - until one day, last year, I remembered, wait! I want to go to Dad's game. I emailed him, and he explained that the season always ended before summer started. A fact I should probably have already known. 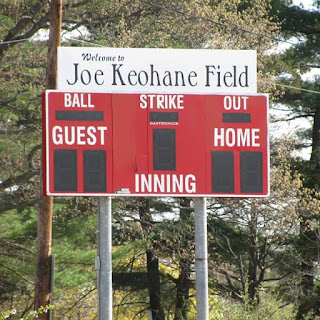 Three strikes, my son, my son. Hearing Dad announce his retirement was bittersweet. So proud of him, always have been. Hell, a few years back they even named the field on which he'd coached for half a century after him. It's called Joe Keohane Field now. I tell everyone about this, and make it a point to drive by when I'm in town so I can see the sign. But I knew: I waited too long. This isn't the only time I've put something off only to find, eventually, it's too late. Will the fact that my only memory of seeing Dad coach in fifty years is of me crying when I thought the sun had disappeared, change how the universe is spinning? No, only mine. Likely, when I'm dead, Jesus will sit me down in the movie theater of judgment, show this gap in the reel of my life and shake his head. 'Really?' he might say.

But, in the end, I have my words. I have this little universe of letters which I put together now and then to make something new, and though I never connected with Dad with a ball or bat or skate (dropped out of hockey camp, too), I can this way, With words. I regret, and always will, never focusing outside of my little world long enough to step back onto your field more often, Dad, but I've always, always been so proud of what you have done. You're a hero in many ways, to many people, not the least of which being me.

Looking forward to seeing what you do next.

Ed Gilbert said…
Very nice tribute to your Dad. He was certainly a unique Dad / person who gave a lot back to the community. I often think about him when I reflect on my years of coaching, not quite half of his years. Good job Dan.
10:36 AM