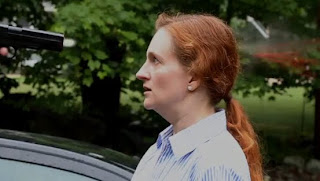 Hi, Everyone. Way behind on my posting.
Remember "Contaminant", the short five minute film we did as part of the NH 48-Hour Film Project? Well, last week they had a "Best of" Screening and presented the various awards.

In order of presentation, followed by award:

Wax Idiotical Films won for Best Film and received
* A Trophy
* A cash prize covering this year's entry fee.
* Filmapalooza: The City Winner will be screened at Filmapalooza,
the official 48HFP Awards Weekend.
* A copy of Movie Magic Screenwriter 6, the premier screenwriting
software and the choice of Hollywood. ($250 value)

One of the judges told our fearless leader Ned Utzig that he wished there was an award for Best Overkill, because they would have given it to us for using a monstrous laser blast shot from space to kill only two people in a driveway. :-)  Too funny. Fun, fun, all around. It was a pleasure to be part of it.

And we're in the early stages of maybe doing something new, though I've been very negligent (sorry, Ned) in getting the script done with current events around here. Promise, Ned, very soon!
Posted by Daniel G. Keohane at 9:11 AM