The Week of Moving On 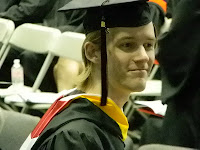 So, it's been a quiet week. Needed this, considering the week before this one was non-stop Big Events with enough drama to choke a horse. The week leading up to Memorial Day weekend was the same one leading to my son Andrew's college graduation. Temperatures dropped to the 30's in Albany, there was even snow only 30 miles west of us, according to the weather reports, and we had to split our ranks. Andrew's mom and I managed seats in the new venue, the indoor stadium where the graduation-proper was held because of the rain and cold, while my wife and daughters watched from a video monitor in the next building. 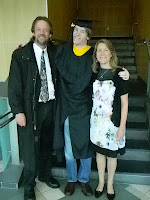 Plenty of drama of the happy kind in the morning, watching my 21 year old son stepping with cap and gown into the next phase of life. I was proud and somehow lonely. For various reasons, but 'lonely' works. The not-as-happy drama kicked into gear later as we got Andrew's college apartment packed up into the car and we headed home, Linda and I. Andrew and his mom and sisters followed tradition and stopped at Cracker Barrel one last time. Now he's an alumnus, and will have to learn to deal with his Alma mater always sending hapless work study undergrads to ask him for money.


We're off the New York City tomorrow so he can attend a meeting at his new employer, and we're going to try and look at some apartments. Need to find a place before July 1st, either a lease or a sublet. 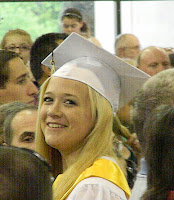 The long weekend passed and we turned our attention to my daughter Amanda's high school graduation. There is drama in my world, hurt and pain, and this only intensified as the week went on. Not going to get into it. Tired of talking about it, but the graduation came and Janet, me and daughter Audrey attended (Andrew was sick). Crowded time, but very nice graduation ceremony. The night was late, the the other daughter had homework, it was after nine, so we said congrats, gave some battle-weary hugs, for the week had worn on us (and it wasn't over) then I left Amanda to head out and celebrate with her friends. I went home, relieved that the ceremony went nicely and Amanda seemed happy. I felt lonely, too. Parents must feel this as these kinds of things happen. Maybe there were other reasons but this felt like a right of passage kind. I will diminish, and all that. 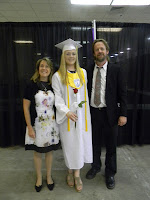 Drama, drama, angst and pain, then we come to Saturday, and Amanda's final dance recital with Chickee's Dance World, where she's been dancing since the age of 4, fourteen years ago. I have another blog entry about Amanda and her dancing, and at least I can hold on to that. She was perfect, beautiful up there tall and graceful doing her final dances, including 3 extras she did with another girl who's regular partner sprained her ankle so Amanda filled in for her. Godparents, aunts, cousins, friends were in attendance, and she did well. Though she didn't acknowledge her mom during the recital, she had a nice thing to say about her on Facebook later, which is good, since she'd been by her side in all things dance... insisting on being the one who was by her side for all of it, in fact. I still got to enjoy the competitions and recitals and got to see my daughter growing up every day, and year to year during the first weekend in June, so I have no complaints. It worked out over the years as it should have. This time around, this last recital I felt more like a shadow on the wall, still grateful to have seen the show and not missing any of the dances, if maybe a little more insignificant than usual. The hugs at the end were more tired and weary, eyes downcast, but it was another milestone. One significant moment after another, and in between mortar, of which kind I won't get into, except that it was inevitable, and was going to happen one way or another.

Life moves on, little children become teens become adults moving into their own worlds. Eventually they come to the understanding that their parents don't stop moving the moment their children leave the house, don't sit ion the couch in stand-by mode. Eventually discover their parents are human, and have lives outside of theirs. The parents want to share it still, these lives, every day and every way as some vague song lyric in the back of my head says. But that can't happen. We'll settle for now and then. As often as possible. Hopefully staving off the cats and the cradle syndrome. And still be a part of their life. We want that but to do that, at some point, it can only be done in the right context. They've grown up, they're adults, and as such our answers, our reactions, our responses to our kids needs to be no different than to another adult - a fellow passenger in this world we live and from which we've done everything we could to shelter them.

Because they are adults, and the last, best thing we can do for them is to accept this fact and treat them as such. In love, and correction.

Most times, the two are the same thing anyway.
June 2013