Solomon's Grave is Gone But Not For Long

So, I recently got my rights back for my first novel, Solomon's Grave, from the publisher. After seven years, with no real sales to speak of after the initial release, I decided it could do with a shake up, perhaps put it out myself, give it a once-over, new cover and, most importantly, lower price. I've considered perhaps finding a new publisher for it, but to what end? It's the beauty of the market these days, most presses won't bother with a title which has already found its audience - what would it benefit them? I think there is still a market for the baby, but it would require a little marketing to get it in front of readers, something most small presses don't do (and, admittedly, most authors, myself included).

So, yea, it'll be nice for the book that started it all to be back out there, with more control on my part. Here's the cover, by the way, put together by the Lynne Hansen Design: 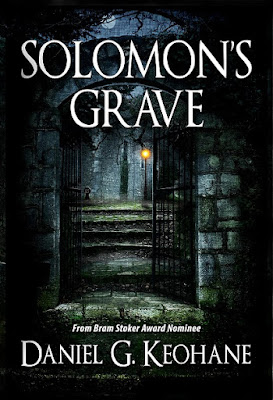 I have the book pretty much formatted for print and Kindle, but decided to read through it, tighten it up a little. Is is, after all, my first novel and I can tell I've gotten a little better at this long form game since then. Nothing major so far, just a nip or tuck in the writing. I'm hoping it'll be out before Christmas. We'll see!