Reflections on Last Month's MS Walk from my Brother Paul

Before time gets away from me, I wanted to be sure to write to all of you about this year’s MS Walk.   The weather could not have been any better all three days – warm but not too sunny or humid.  Anne and I were like a well-oiled machine this year as we sped along the streets and bike paths of the Cape, finishing each day earlier than we had ever before.  Also, beyond the usual barking of a body about to turn fifty, physically I felt better than expected.

As I reflect upon my 15th year participating in this event, one emotion in particular hits home more than any other.

Love can lighten any load
I spoke with a man who currently serves in the military and was walking fifty miles for his wife.  He said that when his wife was initially diagnosed, he was deployed overseas so was not able to be by her side.  When he returned home several months later, he came back to a wife whose day-to-day struggles were beyond what he could imagine.  He felt powerless as he saw fatigue continue to overwhelm her.  As I spoke to him, I noticed that he was wearing combat boots and, on his back, he carried a 35-pound pack.  He said that if he couldn’t take the MS away from her, he could at least partially understand the exhaustion that she feels as a result of it.   As he slowly crossed the finish line each day – long after every other walker – he felt that much closer to her.  And his love for her grew that much more. 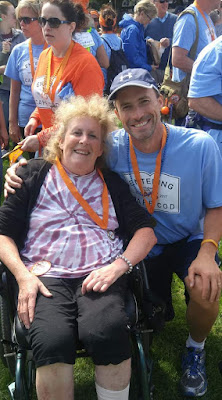 I love my sister
I hate MS.   I hate the impact that MS has had on my sister.  And, although I hate the fact that an MS Challenge walk event is needed, there are many things that I love about it.  I love being inspired by Anne’s courage and determination.  I love the smiles and jokes that she has for everyone we meet along the route.  I love that she always makes it a point to thank people for participating.  Most of all, I love the time that this event allows us to share together.  Over four days, 200 miles of driving and 50 miles of Cape Cod roads and bike paths, we are each other’s captive audience.  You’d think we would run out of things to talk about but we never do.   I cherish all that time we spend together and it makes me love her even more.

Generosity and love have no expiration date
Being that this year Anne and I were a team of two, I lowered our fundraising goal – but still left it at an optimistic $5,000.   That’s a high number for such a small team but I was hopeful we would come at least somewhat close to reaching it.  I knew that this was my 15th year asking many of you for help.  That’s a long time to ask for support.   So I was prepared for maybe a little letup in donations.  But, once again, I was blown away by your generosity.   Not only did you help us reach that lofty goal but you shattered it.  All in all, donations came in at a staggering $7,200!

As always, I cannot thank you all enough.