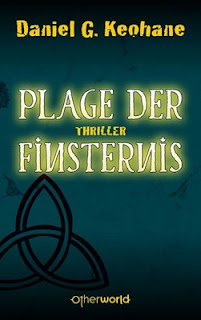 A quick detour from my pathetic attempt at promoting Solomon's Grave (though I have an idea which I'll share with the 2 people that read this blog and everyone on my various lists, a little later).... in keeping with the pattern of Europe buying my work first (someone once called me the David Halsselhoff of Horror) my novel Plague of Darkness is coming out in Germany in September by Otherworld Verlag - it just got a new cover. The title, of course, is Plage der Finsternis, as it's in Deutsche (German), but I like the cover art (neither me nor my editor Michael Krug know for sure what the symbol in the corner means... not yet, we're trying to find out, lol).
Plage already has garnered some major interest by bookstores, thanks to a new distributor who hopes the book's potential success could also carry Das Grab des Salomon to a new audience as well. Here's hoping.