A Little Nod for The Little Sleep 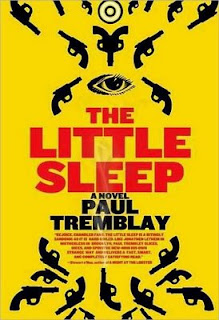 Now and then I've got to tout a book I've read and loved, and when it's from a friend, even better. Paul Tremblay's first novel is called The Little Sleep, and in all honesty this has to be a record for me, how quickly I read this book. One of those stories I was sad that it had finished.
In short, South Boston private investigaor Mark Genevich gets a new case. Problem is, he spends quite a few chapters trying to figure out who hired him and what was said, since he was asleep at the time. Genevich is a narcoleptic, a condition which causes you to fall asleep anytime, anywhere. Problem is, you might still be functioning and speaking in the waking world while this goes on, as when Genevich gets his assignment. Sounds like a premise for a humorous novel, but in reality it's not. There's quite a lot of dark humor in it, and the character - who narrates the book in traditional first-person – is rather self-depricating at times. However you hurt with the character far more often than laugh at him, and this is deliberate by the author. Even so, I found myself laughing out loud very often, mostly due to the clever dialogue and sharp writing. The case, as its nature more and more hits home to Genevich, is unqiue enough on its own without everything else thrown in, including times when the character wakes up after an action-packed scene and is never quite sure - and so neither are you, as the reader - what was real and what wasn't. In the end, it really didn't matter.
Nice job, Paul. I'm glad to hear the next book in this series is underway. Can't wait for it.....
Posted by Daniel G. Keohane at 3:39 PM