1984, or Watching the Tube Slide Down Kane's Throat

I recently decided I simply am not reading enough of the classics. I managed somehow to avoid all, or most, of the literature courses when in school, at least those which made you read books... no seriously, I was a fantastically lazy reader (and Stephen King would probably say fantastically lazy writer, since I just used an adverb, but then he did, just there in the beginning of this parenthetical remark, so I think I'm entitled to adverbise now and then....)... okay, where was - ah!
I was a lazy reader. Loved books as a concept, just couldn't focus on them for long, not when I was younger. Until two things happened... I entered eighth grade and Miss Dawson's English/Reading class at Francis Wyman Middle School where I was introduced to Richard Matheson and H.P. Lovecraft, and a couple years after that, read the novelization to Alien: not high literature but scared the shit out of me, then soon after - Fahrenheit 451 and Ray Bradbury entered my life. A wonderful moment for a reader when he meets Mister Bradbury.

More about Miss Dawson another time. The woman who made reading fun and amazing and... another time. Let's jump ahead in the Life of Dan about 3 years or so... maybe 4... 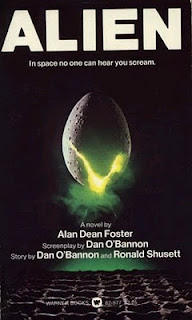 The novelization for Alien was written by the King Of Novelizations - seriously, he's probably the only person who could have given my fellow Neconer Chris Golden a run for his money in the arena of sheer volume of work - Alan Dean Foster. In retrospect, I don't think anyone yet knew what the alien itself was going to look like - Foster was likely given the screenplay and as he wrote the book H.R. Giger and Ridley Scott were hashing out the monster... the book never described it. (so when, years later, I saw the movie I thought - that's it? My mental version had a hundred arms and it was furry... dunno, the movie one was still frikkin' scary... so where the hell was I....?
I was going to talk about classic literature and 1984, its dystopia, a life of illusionary living and poor Winston Smith, was going to tie in Christmas and... I guess all of it has to wait. I'm too caught up in the Summer of '80, or '81....

Hampton Beach, vacation week at the my parents rented each year and Mom - God bless her, always pointing me, if inadvertently, to the dark side - hands me the novelization she'd just read of Alien. Not sure how many novels I'd read before that... a few, none I remembered much save Great Expectations and Hemingway's work, (all pretty good), the stuff from Miss Dawson's class (later... later...), though the act of reading for school was a chore
Side bar: kiddies, I should explain: I drank WAY too much soda, was constantly wired on caffeine and sugar - having bad grades? Get the Frak off the Mountain Dew, deal with the withdrawals for a couple of days, and watch how the frakking world suddenly becomes available to you TRUST ME...., over-doing the power drinks the caffeine and sugar is not making you smart or alert, you're body is simply carving it and telling your brain - look, cut down at least...).
Back to: Hampton Beach, Mom, sand in between the pages... OK, back on track... I've never forgotten the scene - not in the movie, but the Book(!!!) where Kane goes down into the ship, the face hugger bursts from the egg, latches on, and I cringe as the author goes into detail how the alien melts the faceplate, pushes the tube down the guy's throat... that, boys and girls, wasn't filmed. In this case, the novelization was much better... especially to a 17/18 year old boy.

Hey, Kane was played by the same actor who portrayed Winston in the best adaptation of 1984, a topic I was about to talk about tonight but then put aside for this after-midnight blog post.... (John Hurt, by the way, in case you're wondering - sigh, OK, the wand salesman from the Harry Potter movie). I couldn't put that book down (Alien, I mean, though 30 years later same went for 1984). Read it in a week, a lifetime record back then (and maybe now, though I read like a fish these days... fish read, so shut up). I read at the beach, at home on the front yard in a folding chair.
All the while, brother Paul watches me from his sad, 4.5 years younger-than-me vantage - staring at brother Danny staring so intently into that green paperback book. He inquires. I tell him. Poor 13 year old kid was never the same again... he read it when I was done. Was slapped upside the head - I remember watching him sitting out in the front yard and freaking out while reading it. Books are cool. They do that to you sometimes.
And books became cool for me with that one. I recently re-read it - and yea, it was an early A. D. Foster book, he got better. It wasn't great but for the first time, it didn't matter. The story grabbed me. I was pulled away into some distant, unknown planetary system and everyone around me was friggin' dying and it was wonderful. In a literary sense. I could be elsewhere, escape to new worlds and be back in time for supper. It wasn't a happy story - I mean, more people lived in 1984 than Alien, but it did what it was meant to do, for me, in that summer. Finally bonked me on the head and said look! Books! Read more, visit new and exciting places before you step on your glasses like Burgess Meredith and lose the chance!
Posted by Daniel G. Keohane at 11:53 PM