The kids have asked from time to time, is Christmas really Jesus' birthday, the actual, historical day that He was born? I always answer the same way, which sometimes catches them off guard but, hopefully, will keep them from being sheep, help them understand their faith a little better than, well, sheep who feel anything which deviates from their own self-imposed norm is far too upsetting and threatening to their own faith, tentuous as it probably is if a simple thing like History freaks them out.

No, Christmas is not the historical date upon which God came into the world in human form (to be all formal for a second). Well, it could be: there's a 1 in 365.25 chance of it. Less of a chance, actually. Most historians believe Jesus was born sometime in March - keeps in line with the other historically-proven events surrounding the nativity story: the mass murder of children by Herod (I think it was Herod), the census taken by Rome, etc, which was why Mary & Joseph had to travel to Bethlemen in the first place. So, likely, it was March. Why then, you ask (as have the kids), is Christmas on December 25th? The answer makes perfect sense, even though I can already sense a large number of evangelicals covering their eyes (for NO good reason - have some faith in your faith for once, will you?). The early church was constantly battling for attention with other religions as they spread through the world. December 25th is the festival of Saturnalia, some kind of pagan holiday which I think has gone out of fashion over the past hundred or thousand years. But it's a time, for most if not all religions, to celebrating the fact that - AT LAST - the days are starting to get longer.

December 21st is the shortest day of the year (the Winter Solstice, if you're taking notes). So, the Church decided hey, this would be a good time to formally celebrate the birth of the Messiah, on a day when the world is at its darkest, but the light is beginning to win out again, as it always does. Though the winter is going to get worse, the light is going to grow, and the Light of the World is here. I'm sure the Church used a lot more Latin words in its decision, otherwise people might understand it better. But that's the gist of it, according to Father Jim, who's cool like that. He tells the truth, and doesn't worry if the Truth is dangerous. Truth never is. It can hurt, if you aren't equipped to handle it, but it's never dangerous in the long run.

So, that's the history of Christmas. The concept of Santa Claus came about in 1857 when a spaceship landed in Brussels with one pilot, wearing the now-famous red suit and sporting a beard (which, in truth, was an elaborate set of gills for breathing our atmosphere). Naturally, the villagers who encountered this rare visitor killed him and burned his body, but then felt a twinge remorse and told their children the fable of Santa Claus, and that he wasn't really dead, but instead fire gives him strength to be able to bring shoes to all good girls and boys. In fact, this is how the tradition of lighting fires in the fireplace on Christmas Eve began.

1986. Our first Christmas together. I still remember, 23 years later, sitting silently on the couch, listening to George Winston's beautiful CD December - an album which is a must if you truly want to be in the winter/Christmas spirit. Silence, save the music, and I had a vision, clear as a bell, so clear I've always remembered it. I was suddenly sitting in a living room I didn't recognize (until years later when we bought the house), the front door was open but the outer was closed, an all-glass storm door which allowed full view to outside. We had children, and they were standing so rapt and small in front of the glass, looking out at a foot of freshly-fallen snow in the yard and the porch, and George Winston kept playing, and this warm house was lit up with Christmas lights, there was a tree, and all was well in the world. 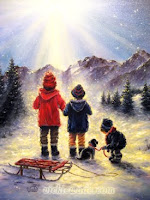 Then the vision ended. I sat there and knew I saw something that could be. And it was. Years later in our house in Worcester, I wasn't surprised when I looked up from where I was sitting and little Andrew and Amanda were looking out through the glass door on an almost-Christmas eve watching the snow fall. The scene wasn't exact, perspective changed, the living room was on the left not the right, but it was the same.

It was a good moment, both in reality and the original vision played out to Mr. Winston's timely, repetive piano chords in her tiny apartment. We have these moments, these visions of what could be, and when we follow the path they lay out for us we find them. For life to work, for it to have "meaning" as the philosophers so often say, we need these visions, these views into a future which is good and perfect and know that the specific moment we can see so clearly in the future may be surrounded by painful ones, because life is like that. Up and down, pain and pleasure. But those moments, these gems of sight, looking at your children looking out the door at the freshly-fallen snow, tells us that it's OK, that it will be, that it could be, if we accept them as possible. It'll be a time when we can breathe again, recharge. That wonderful, incredible time and life envisioned, then lived, in 1986 were relished and embraced for as long as possible, and the world itself is not going to simply vanish afterwards, there'll be more to look forward to. There always is.

A year from now it'll be Christmas Eve again, the oldies stations will play nothing but Christmas tunes after Halloween whether anyone wants them to or not, it'll snow again, filling the yard with a soft white comfort set ablaze in red and yellow Christmas lights. In a moment in another future, it'll be a harbinger of contentment again, bring the excited wonder my kids still feel even now every time December 24th rolls around and the anticipation is too much for their open hearts too bear. I envy them their wonder, and we both feed it as much as possible. And, in turn, they never fail to feed mine. Spend time with yours this weekend, soak in the lights and the warmth and ignore everything else. Don't look back, or forward. Just for today and tomorrow spend it looking at the tree and the snow and the fire in the hearth, watch your children or family or friends opening their gifts and know that there are more visions waiting to show themselves, in whatever form the future will be. 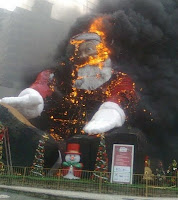 Know this, then put the cookies out for Santa, as this is the traditional token of repentence offered for that strange visitor from another world who met his end in a strange land and yet would unwittingly make so much money for retail outlets, and so many mall children cry, in the years to come.