Theater of the Morning

Speaking of that state when he first wakes up and still in bed, Ray Bradbury says,
"At that point of the day, all kinds of thoughts and stories come to my mind. Many of those are metaphors. It is like all my characters come to me and talk to me. What I have to do then is wake up and start writing what these voices are suggesting to me. I let them write the story! I call it: the theater of the morning." 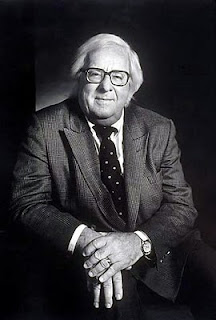 It would be nice some day to be able to sit in bed every morning, think about what to write, then actually get up and do so. Actually, I should be able to. I should just do it, but I'm not much of a morning person. My Theater of the Morning usually draws open its curtain when I'm going to bed, or driving, but in the mornings... it varies. Depends what's going on in the world. In the past, I would wake up and my mind felt new, like a street the morning after a major wind / rainstorm had blown through the night before. Air is clean, everything washed new. I would wake up, and for a few moments not remember anything from the night or day before, remember nothing except perhaps the dream which just ended. All was well, quiet, rested, then, slowly, the real world creeps in. But for a brief moment there was no - well, no anything. Like I said, there could have been a dream, sometimes intense (nightmares are my usual fare), other times seemingly pointless, and other times very happy. When times are at their roughest, I sometimes dream that they aren't, that everything that had happened was itself a dream, and now things were good, happy, then I wake, still happy, the dream lingering, until reality creeps in and what is real, what is not, sorts itself into the proper order. But in that flash... in that flash, the stress and pain was gone.

The Theater of the Morning is when dream-journalers scurry to grab the notebook from the bedside table and write down every detail of the dream before it fractures and blows away in the wind of wakefulness. For most, it's a simple, slow breath of clean air before throwing aside the sheets and letting the cold morning do it's wakey-wakey thing. Brush teeth, pat the dog, head to work, or work-out, or for some lucky few wandering into the study or kitchen table to write. I do write in the mornings sometimes, at Starbucks (gave up on Panera Bread because they have free Internet access and that was one more distraction/temptation I didn't need), at lunch (depending on work schedule) at the cafeteria or even at Borders, in the car if I'm not the driver, sometimes at night. Driving, though, is usually when my head's lost in the theater. Working out points. When I'm writing, when I'm deep into it, I'm there, too, and there is result. I miss that, miss the days when what to write in any given chapter was the hardest choice to make. But it's been a long time since that's been the case. But the Theater is always there, waiting for the audience, waiting for attention. Somedays it's easier to hop up onto it than others, hopefully these days will come again with more frequency. Maybe some day I can wake up from a bad dream and the dream will slowly fade as I realize that's all it was, and that everything is, in fact, OK in the world.
Posted by Daniel G. Keohane at 2:16 PM