I'm posting every day for the rest of lent as a way of breaking down walls I've built over the years - I think... to be honest, I'm not exactly sure why except that I feel I should... it's all badly explained here...) On a side note, just got a call from my credit card on some suspicious charges - and yep, sure enough someone stole my card # and was charging a bunch of stuff to video game software and having it shipped to California... they killed the card, are issuing me new ones, but you know - someone robbed me. The new, modern way. Wow. This happened one other time, but a long time ago. I have to slowly figure out all the places I have this card for auto-charging (like Netflix etc) now, so there's some inconvenience...

But back to the real world as it is...

Been feeling pretty melancholy the past couple of days - with interruptions for fun, like the Oscar party, but yesterday I was in the doldrums... and yes, I know, I was exhausted. That happens when I'm tired. I can't imagine how I could have ever made it through some of the nastier years in the latter part of the previous decade without my faith, because I was tired a lot, lack of sleep & stress. Funny how so much of stress we feel is self-inflicted. Even if we're not always the inflicter, we choose to accept it. But we do inflict a lot on ourselves, though, don't we? Worrying about things, doing stupid things them worrying about that... but melancholy is, in my own definition, like swimming in past sadness, a pond that you know exists in the woods which you can choose to never go to again but sometimes in your broken tiredness find yourself at the edge of. In these moments, you can do one of three things: 1) saunter into the warm but dark water of the pond and swim through the sad misery again, revisit and remember the pain, let it permeate your being again; or 2) turn and run from it - maybe stand there, acknowledge it, then run away... and that's probably how the majority of people deal with it. But I think when you do that, you will be tired again and somehow find yourself at the water's edge one day in the future. And again another time. Ad infinitum. 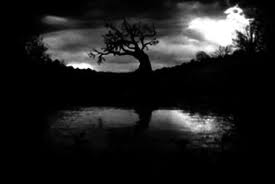 The third way is change. Begin dismantling the sets of your life - always knowing it's the same life, and the past is the past and you cannot ignore it - and know that if being tired leads you down the path to the pond, rearrange your life so the path is gone - not blocked, gone.

Yes, yes, wax poetic and you can make anything sound simple.

Maybe this is simple. Simply reconfigure the world around you. Sure. Piece of cake.

After a contemplative pause. How do you do that? Well one of two ways: 1)... yes, this seems to be a list day... 1) go mad. Did that once in the summer between middle school and high school. Long story. Some day I'll tell you. One reason it won't work (among many): the world around you does not change outside the walls of your temporary hiding place; or 2) Change your world. Or reconfigure it. Though reconfiguration is change, so.. change your world. One wall and one aspect at a time.

Why the title of this entry? In writing, an author creates the world formed inside the pages, the characters are given personalties, life, hopes and dreams, the living room in one scene has dust on the mantel and a heirloom threaded doily on the table with one elaborate and ancient edge browned and curled.... the author puts words together to make images in the reader's mind. If it is done right - in a scene that is the epitome of scenes, the author and the reader dimish to the point where only the characters and that doily on the table exist.

I must diminish as the author so the characters can live. John baptizing people and being the most famous, if not eccentric, figure in the public eye of his time told his diciples he had to diminish, step from the spotlight, when Jesus began his ministry. John's role, his purpose, everything he'd done to that point was to prepare everyone around him in how they think and act and see their pasts and futures, metaphorically till the soil, so that the Messiah when he came could plant the seeds and reap a harvest of souls....

Yea, sentences like the above are good examples of how an author does NOT diminish. :-) Still, point made, if not a little dramatic.

But I must dimish in other ways. My world is not the center of my world any more, if that makes any sense. It was - and I read recently that depression is the supreme manifestation of self-centeredness. You get so wrapped up in your world that all faults and cracks in the walls become the most important thing in the world. Paying attention to the pond mentioned above will invariably give it life and draw you back. Looking outside your protective walls gives you new perspective and takes your mind off the crap on the bottom of your shoes.

My brother mentioned a shooting that happened recently - some psychotic cop killed other officers' families, and I had no idea what we was talking about. He looked at me like I was daft. Maybe I was. 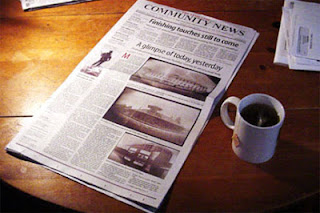 The my earlier point (sorry, got off track), diminishing oneself helps other people who might gain from your existence. How? If you take the focus from yourself, you tend to stop talking about yourself. If you take the focus off of yourself and put it on other people, one very, very important thing begins to happen: you start listening. Then they will talk, and you will learn from them. Then they will learn because a conversation will begin.

So, to this jump-aroundy essay's point, we must become large enough to embrace the world without fear, and as we do so diminish ourselves only to the point where we are no longer the center of our world, but have become part of it that we might truly be with the people in it.

There's so much more to say, but that last line sounded cool enough we should stop there.
Posted by Daniel G. Keohane at 1:46 PM