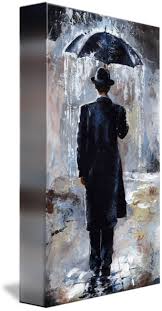 Overall, today was a good day. Better than previous days, at least. I find myself walking around the house - and mostly it was walking around the house today because it was raining and cold out - with a cloud hovering over me like some immature 1920's cartoon character. A little guy in a round bowler hat and an umbrella and raincoat, hunkered over as he walks down the city street with the black storm cloud following him around, while everybody else is walking in the sun.

Of course everyone else is under the same rainstorm, dealing with the same plague, for lack of a better word. We're all trapped in our own little worlds trying to reach out and connect. I do find reaching out and connecting has been the best way to get some light in here. I don't understand why I'm like this, except that I'm pissed off that I'm feeling some semblance of fear. Again it isn't any fear of dying - I don't care about that it will be an adventure seeing what's on the other side -  it's the leaving behind / what will they do / what will he do / what will she do / who will watch them kind of concerns.

I know I'm not the only person asking these questions, and although we need to plan for all of this even if this wasn't going on, it's something we avoid doing but now there's no choice, because the possibility is being dangled in front of us like some metaphor I can't think of at the moment. So do it, plan for it and let it freaking go. Plenty of people out there are afraid and need help. Even simply writing blog posts that nobody reads, but also working on kids' online church services to give them a little bit of a distraction who teach them that God loves them regardless of what's going on everywhere.

It's interesting, as a side note, I'm writing this with my voice laying in bed. Will need to clean it all up tomorrow with the keyboard because I'm a mumbler and lovely child to Wells Boise typing (I left those last few words in because I have no idea what I might have actually said). I feel like some high falootin' philosopher talking into a device and spewing forth all sorts of poetic nonsense passing as deep, deep insight into life, the universe and everything.

That aside I am trying to come out of this funk. The kids are doing good today. We did Church online and though Life Church's servers again groaned under the weight of millions of people going online, I really have to hand it to them for offering this up for all of us. Twice as many people online watching our service this morning than last week, still isn't a huge amount but it's it's good start, and it's only going to get bigger, I think. Marty had an amazing message to share with everyone, and we put on a puppet show for the kids :-). But it's something. People (me included) need to be reminded. People also need to be led, but with positiveness, not anger. Like Linda says, this whole world going to be a lot more straightened up and clean when this thing blows over. If it blows over. It'll blow over, not like this is the first time this has happened, just the first time it's happened when we were all ready for it comparatively.

Tomorrow's a new day and we'll be grateful for. It's the best way to start every day.