Pre-Christmas Promotion #1: The School That Screamed

The School That Screamed by William D. Carl 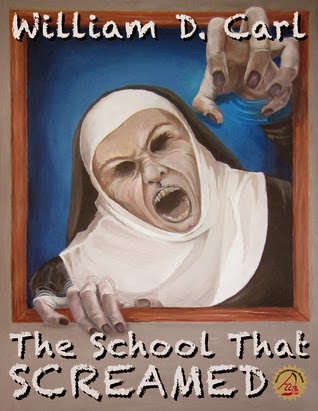 Dolly Elliott's School earned its reputation as a school for bad girls. Nestled within an isolated forest outside of the London suburbs, it's the last stop for students who have been expelled from every other school in Europe. For the right price, the administrators guarantee a diploma for any girl, no matter how rebellious. But, the halls of Dolly Elliott's are haunted by more than the laughter of the young women earning their degrees. At night, the wail of a baby can be heard emerging from the cellar, and foul odors permeate the dorms. Glimpses of blinded nuns disturb the daily routine of the young women. And something is moving from the other side of the mirrors, seeking a way into our world. It hates the living, especially the girls it jealously watches. When Laura Pennington arrives as a new student, she carries secrets, a past that led to her fleeing her last school screaming in terror.

On the same day, Sarah Stallworth begins teaching the young women of Dollie Elliott's, and she brings her own baggage. When a young maid is horribly mutilated and a teacher is murdered, they launch an investigation into what roams the halls of the school at night. The past is trying to intrude upon the present, attempting to force its way into the new century. Can Laura and Sarah learn the terrible truth about the school before more women die?

THE SCHOOL THAT SCREAMED is a loving homage to the over-the-top exploitation films that were imported from Europe in the 1970s, a drive-in flick brought to vivid life on the page. Full of sex, sin, slashings, and secrets, it delivers a grindhouse sized dose of terror and laughter.