The Faceless One by Mark Onspaugh

In 1948, when he was just a boy, Jimmy Kalmaku trained with his uncle to be the shaman of his Tlingit village in Alaska. There he learned the old legends, the old myths, the old secrets. Chief among them was that of a mask locked in a prison of ice, and of the faceless god imprisoned within: a cruel and vengeful god called T'Nathluk, dedicated to the infliction of pain and suffering.

Now all but forgotten in a Seattle retirement home, Jimmy finds his life turned upside down. For when an unwitting archaeologist pries the mask free of its icy tomb, he frees T’Nathluk as well.
Stuck in spirit form, the Faceless One seeks a human to serve as a portal through which he can enter our reality. The Faceless One can control—and mercilessly torture—anyone who touches the mask, which means there is no shortage of slaves to ferry it across the country to its chosen host.

Yet the Faceless One has foes as well: Stan Roberts, a tough New York cop whose pursuit of justice will lead him into a dark abyss of the soul; Steven, Liz, and Bobby, the family of the doomed archaeologist; and Jimmy Kalmaku, who must at last become the shaman of his boyhood dreams. 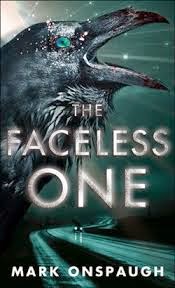 The Faceless One by Mark Onspaugh