Day 38 - Some Good Stuff Coming Out of All This

April 21, 2020
So last time I talked about stuff I miss from BV (Before Virus) but ran out of room, since a lot of good has come out of this isolation. I see all of this as the world rebooting and though it's much easier to wax on positives with this since I'm not sick yet, doesn't make this stuff any less good.

For example, we've had more meals together as a family than ever before. Not every day, but at least three times a week. We talk, usually someone gets annoyed with someone else, but we're communicating as a family. Like I mentioned before this is not a traditional family as it is - though I wish it would become one. If more people fostered and brought others outside their usual spheres into their family it would be and the world would be nicer. Now on this note, a lot of stuff generally hidden or stuffed deep, deep down is coming to forefront for a lot of us, from the youngest (Elias learning he is NOT center of the household, especially with a new four year old brother to foil him every step of the way), to the oldest (Linda - who is older than me, remember that! - and I finding where we are pretty good and where we suck at this parenting thing, and for the latter how to work on it). Even as I type this Elias is having a complete meltdown downstairs... be right back.

I also learned better how to edit videos and be in them (aka church stuff), not worrying how dumb I might seem, because it's doing work to teach Littles about God. 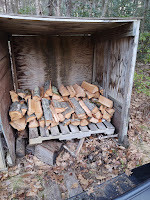 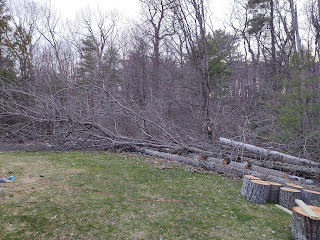 Been cutting a bunch of trees down in the back yard, finally building up some firewood for next winter and also opening up 22 years of mountain views (my wife would question whether Mt Wachusett is a mountain or a hill, however) covered by tree growth. At the same time, the ramp into my little shed has been rotting away for years, and I was finally able to rebuild it with new pressure treated wood. Last night was Man Night in the yard, ar ar ar ar. i'll keep everyone posted on my growing firewood pile. It's already double what this picture shows. 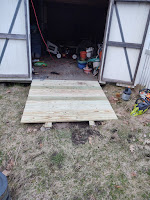